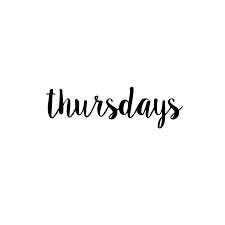 Happy Thursday, friends. I am copying this idea from another blogger today and am sharing a few things about my sons. I don't talk about them as much anymore because they're growing up! It's bittersweet, this whole parenting gig. 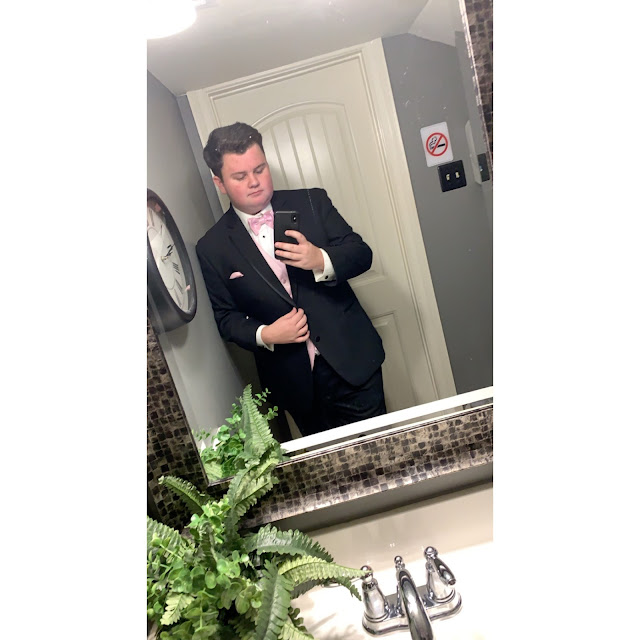 (He's so cute...and all of his friends are starting to get married, which is so strange to me.)

Graham is moving out soon! I say that with an exclaimation point, because how exciting that is to be out on your own for the first time. Know that on the inside, I feel like crying. It's time though, and I couldn't be happier for him and that he FINALLY FOUND A ROOMMATE. He's been looking at rental houses and has found one that may work great. I'm praying it's the one the Lord wants them in and I take great comfort in knowing he will be very close to his Mimi and Papa.

Graham works full time and is very responsible with work. Their small business is family owned and Graham is VP. He is loved by customers and has taken ownership in the company in the last year and for the most part, loves going to work everyday.

The love of his life is still his truck. 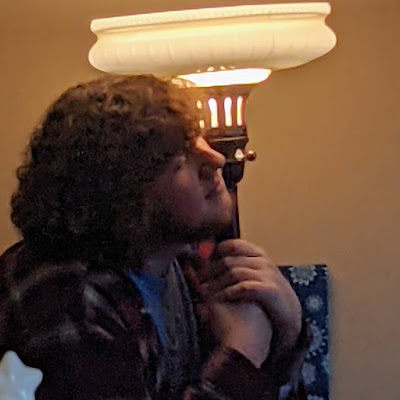 (He's been making us laugh ever since he was about nine months old. Some things never change.)

Drew also has plans to move out soon, probably in the late spring or early summer. Do you know how much our grocery bill is going to go down? I still expect to see him a lot, because he works nearby and will probably come here for lunch most days. I hope so, anyway. I made him promise he'd come see us sometimes—he's my one that I always said would leave and rarely come back to visit. I could be completely wrong about spending his lunch break here, he may not want to do that. He has plans of living in an apartment with a friend or two.
Drew loves his job and is so perfect for what he does everyday. He works at a local daycare, but not just any daycare—one that is great with very little turnover. That means that he works with wonderful people who love their jobs. He's been there two and a half years now and he enjoys going there each day. He occasionally will buy things and take the kids to surprise them with, which I think is the sweetest thing ever.
The older he gets, the more of an interest he is showing in things he never has before, things like cooking and mechanics. He's been learning how to do more things that will pay off in the future and he's gotten pretty good at cooking. He likes to eat so it's important that he knows how to make good food.
I'll end with a more recent picture of Drew, from when he graduated a few years ago, though he has lost about sixty pounds since then. 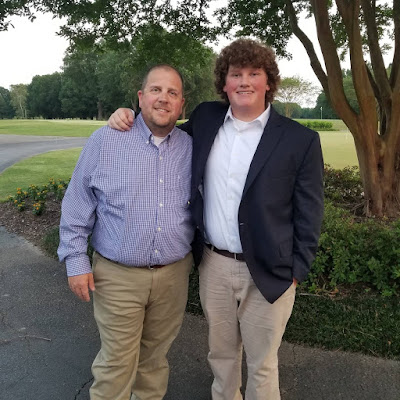 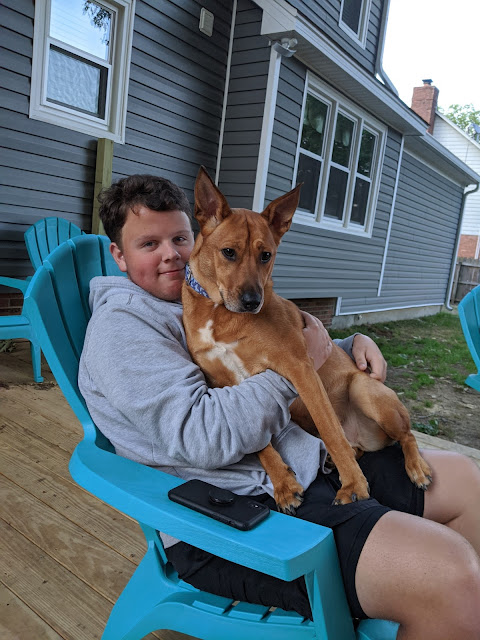 Jonah loves the dogs more than he loves people and some things never change. I love the fact that Jonah tells us EVERYTHING. I love that he is always excited to share bits and pieces of life with us and that he is so honest about everything. Sometimes he gets fired up over things and when he does, it's pretty funny.
He is very handy, just like his dad and older brother Graham. The three of them are just alike, with Drew and Noah having more of my personality. Jonah can do anything he sets his mind to and he loves learning how to do new things. Recently he's done some cool things to his truck and had several people copy his idea. He was upset about it, until I reminded him that such behavior is the highest form of a compliment.
He recently had a job offer and after talking it over with his dad for a couple of days and having phone conversations about it, decided to take the man up on his offer. He will be running a mobile detailing service for a young entrepreneur—I call this young man (he's 20) that because this will be his second business that he owns. He will be paying Jonah a very reasonable amount and he's excited to get started once his truck is running again and when the trailer is finished being customized for all of the products that it needs to hold. (It's also being painted with the name and logo of the company.) I'm so proud of him! He has other plans on the backburner, in case this doesn't work out quite like he'd hoped.
Last, but not least is Noah. 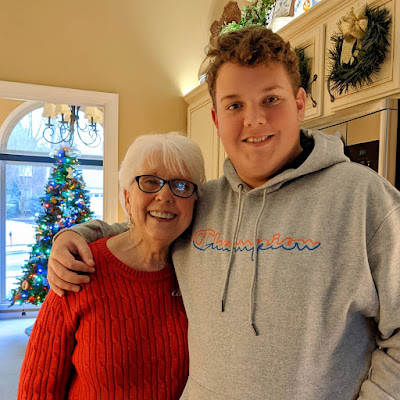 He's the only one who will ever willingly pose for me to take a picture.

Noah is gone more than his brothers and loves being with his friends. It's a little weird that he goes out for this, when all the others always came here to do that. He does bring them here, but they never stay. Maybe it's because we're tight on space.

Noah has two jobs that he works when they need him—one is making deliveries for Nothing Bundt Cakes and the other is as an employee of a landscaping company. He is diligent in both and makes pretty good money when he works, it's just that both jobs are sporadic. He may need to change this soon, as graduation and his eighteenth birthday approach and though he's not sure yet on what his plans after that will be, I know the Lord is faithful and will guide him in this next part of his life.

He is still loving having his own car and the freedom that brings to him—that being said, he doesn't always drive it and sometimes leaves it for Jonah because the truck is broken down. (It's finally going to the mechanic next week—every mechanic my husband has contacted is booked solid for months out!) Though he definitely has a snarky side to him, Noah has always been one of the more thoughtful ones of our four sons.

As far as the rest of us go, the dogs are still living their best lives and being treated like royalty. Crash recently started being afraid of fire and thought the floor was on fire (he could see the reflection of the fire on the floor), so we bought him a rug and now he's fine. Chip is the same cute dog he's always been and Callie still loves to chase the kitty around.

Todd is always busy at work and could always use prayer for that with new things that come up each day and working with the sheriff's department is a great hobby for him, as well as a whole other job. Lately he's been having fun building us fires each night and we love hanging out together to watch tv.

I am keeping busy here at home and being involved in things at church—the worship ministry and the women's ministry. I'm thrilled that Bible started back yesterday and look forward to a new semester of studying Philippians with the ladies in our church. If you'd like to join us and are local, it's not too late! Reach out and I can get you some information. You can also join in if you're not local and the church will ship your book to you. You can either watch the video that will be emailed out each week or you can join over a Zoom meeting. Let me know if you're interested! 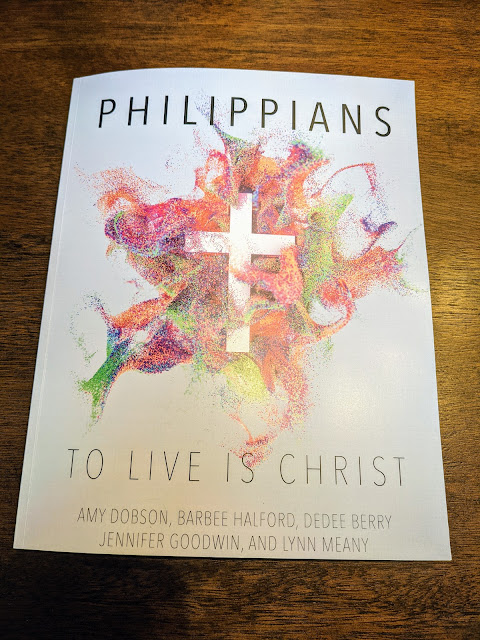 This is what we're studying and it's the second study I've had the honor of helping write.

That was a fun post to write, I'll try to do this a little more often. Thanks for reading along with me! Love to all.

I know you must be so proud of your boys! :)

Way to go momma on raising 4 great young men! How blessed you are to have them close.

I really am, Tanya! They're pretty special. Have a great evening!

Thank you, Marilyn! Yes, I am so grateful for this!

I just found your Blog and I love it! you have a beautiful family.. AND YOUR HAIR!!!! its to die for. what products do you use? i have similar curls but they don't look like that!

Ps. Im Lilly.. cant figure out how to leave my name im sorry