a baby robin, a hawk and a spiritual battle

If you're on social media, you may remember this picture that I posted last week: 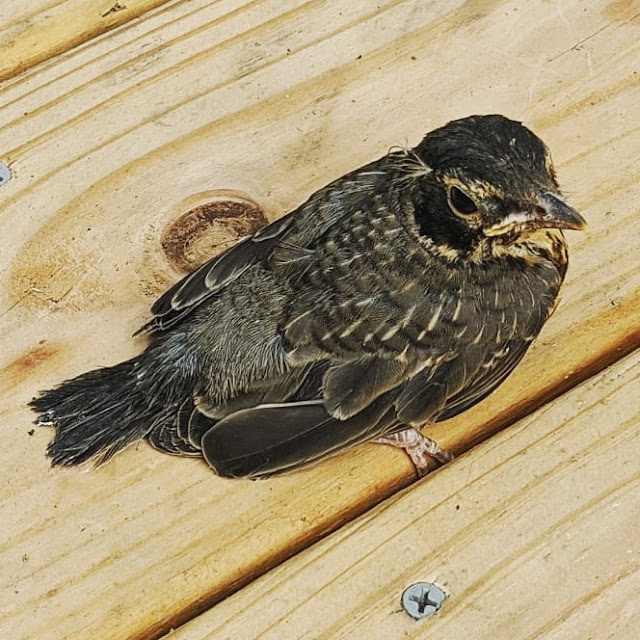 This little guy landed (fell onto?) on our deck and Toddley went out to investigate. I asked him to take a picture and he did, but it wasn't a good one, so he bent down a little closer to take this one.

When he did that, it scared this little guy and he flew off, low to the ground, over to our fence. Toddley went to scare it again to see if he would fly back to the tree he came from and when Todd did that, it worked and this little guy flew to a low branch in the tree. What Todd and I didn't see until the second it happened, was a hawk that had been watching this little guy sit perched on our deck. When the baby bird flew back to the branch, at that exact moment, the hawk swooped down to devour this little robin.

And that is where I'm stopping and steeping on for a few minutes.

That hawk reminds me of our very real, very unseen enemy, the devil. Our enemy is not some little man in a red suit with a pitch fork...he is a very real, very threatening being who wants to attack us. Listen to this verse from 1 Peter 5:8 in the New Living Translation:

Stay alert! Watch out for your great enemy, the devil. He prowls around like a roaring lion, looking for someone to devour.

That little baby robin was not aware of the hawk looking down on him from his perch higher up in the tree, in the same we are not often aware of the enemy watching and waiting for a moment in which he can attack. It's always going to be when we least expect it~and it will take us by great surprise, just like this little bird didn't expect to be snatched by that hawk. When the hawk swooped down to devour him, something really cool happened. Just like I couldn't see that hawk in the tree, I also wasn't aware that Mr. and Mrs. Robin were watching over their little baby bird. The second the hawk swooped down, the parents started attacking the hawk. I've never seen such a ruckus as I sat and watched all of this happen from my seat at the kitchen table.

The LORD will fight for you; and you must be quiet.

Read that whole chapter for the context and meaning, but this same thing applies to us today. Just like God was right there to fight on behalf of the Israelites, He does this for us today. He equips us for battle through the reading of His word. Ephesians 6:10-18 tells how we can fight the very real spiritual battle that is going on around us at all times. We can fight in prayer and that is how we communicate with our Commander, much like a soldier would communicate with his command staff.

His word equips us and we can "pray on" (put on) our spiritual armor by praying that passage over our families. I love to take those verses and just pray them over each of my family members...have you ever tried that? That same passage in Ephesians reminds us that our battle is not against flesh and blood, but against the rulers and authorities, against evil spiritual forces in the heavenly realm. I'm going to tell you a story about a spiritual battle I personally witnessed and then I'll wrap this post up with Psalm 91.

A few years ago I went to a church service at another church, because I'd heard a pastor I love was going to be there to preach~Ed Newton. I don't remember what Ed preached on that night, but the entire time he preached, I was super aware of evil that I felt all around me. There were a few men I'd taken notice of, one white man and a black man and one other, who were all dressed in similar clothing: they all had on cargo pants (the kind with all the pockets), a t shirt and they carried backpacks. The three of them were all around me: two sat in front of me and the third one was behind me. When that third man sat down, it caught my attention out of my peripheral vision and I turned around and made eye contact with him. I stared at him for a full twenty seconds, then I turned back around. When I turned around, he left and I never saw him again.

At the end of his sermon, Ed started telling this story: he'd been the camp pastor at a youth camp on a particular week and a youth pastor came and introduced himself to Ed. The pastor told Ed that he had a student with him who was autistic; that the student would be drawing the entire time Ed preached that week. At the end of the week Ed went to meet this particular student and asked the young man if he could see what he had been drawing all week. The student showed Ed his drawings: all week long the student had been drawing a picture of the students seated in front of him (he had been in the back row) and above all of their heads in the drawing, a battle was raging.

Ed asked him,  "Is this what you've been seeing all week as I've preached?" and the student answered yes. Ed told us that story to make us aware of the fact that we are always engaged in a battle in the spiritual realm, though we cannot see it taking place. And all of this was said on the same night that I felt evil around me in that service. I don't remember any of the rest of the night because the entire time Ed preached, I had been praying and interceding for everyone in the building. I took notes somehow and "paid attention", but I prayed from the time he started preaching until the time he stopped. As soon as he told that story, he finished in prayer, and Missy and I left. I told her about all of this in the car, and she was amazed at all that I'd felt and sat through. She had not been aware of any of this and I was genuinely worn out from all the praying that had taken a physical toll on my mind and body.

She rewarded me with frozen custard right after we left: I'd earned it and didn't feel the slightest bit guilty.

In the same way that the autistic student saw that battle as Ed preached at camp that week, THAT is the type battle we're always in. I'll leave you with Psalm 91, in the CSB translation.

The one who lives under the protection of the Most High dwells in the shadow of the Almighty. I will say concerning the LORD, who is my refuge and my fortress, my God in whom I trust: He himself will rescue you from the bird trap, from the destructive plague. He will cover you with his feathers; you will take refuge under his wings. His faithfulness will be a protective shield. You will not fear the terror of the night, the arrow that flies by day, the plague that stalks in darkness, or the pestilence that ravages at noon. Though a thousand fall at your side and ten thousand at your right hand, the pestilence will not reach you. You will only see it with your eyes and witness the punishment of the wicked. Because you have made the LORD--my refuge, the Most High--your dwelling place, no harm will come to you; no plague will come near your tent. For he will give his angels orders concerning you, to protect you in all your ways. They will support you with their hands so that you will not strike your foot against a stone. You will tread on the lion and the cobra; you will trample the young lion and the serpent. Because he has his heart set on me, I will deliver him; I will protect him because he knows my name. When he calls out to me, I will answer him; I will be with him in trouble. I will rescue him and give him honor. I will satisfy him with a long life and show him my salvation.

I'm going to ask again this week~do you know Jesus as your personal Lord and Savior? If not and you feel a gentle nudging as you read this, respond to Him! Feel free to reach out to me. I'm always around and easily accessible. We are not promised tomorrow.

Thanks for reading my blog. I pray it encourages you.

Several people in our town have Psalm 91 yard signs with the text in colorful letters. It is a response to Covid-19. Very appropriate. My bible translation uses the word disease. Your story of the men was very chilling!

That's neat about the signs, I would love to see that! And yes...it was a very chilling/disconcerting night for me as well. I had never experienced that in my own life, I had heard of other people that had gone through that, but at the end of that night when I got home, I crashed. I remember being exhausted...I'm good if I never have that happen again. 🤪