Women in the Word

Lately I've been reading in books of Kings and Chronicles.  I say that, but that's four books, because of the first and second of both.  The books go hand in hand, and often times, Chronicles repeats what I just read in one of the Kings.  I say this because I'm reading there in my chronological Bible right now.  I'm also doing a Bible study on 1 & 2 Kings called Trustworthy by Lysa TerKeurst.

I'm knee deep into this divided kingdom era, and all the immorality of the kings in those days.  I have cheat sheets to help me to remember all this, but in these days, Israel divided into two kingdoms: the Northern kingdom of Israel and the Southern kingdom of Judah.  There were twelve tribes in Israel, and ten of them went to the North and only two of them to the South.  I remember them by thinking of how Southerners are usually considered to be more friendly than people from up north...and that reminds me that the Northern kingdom was full of only evil kings and the Southern kingdom had some that were better.  (PLEASE know that I am not at all implying that people from the North are evil, they're not!  They're just not considered as friendly as southerners.)  Not great, but better.  Several of the twenty something kings from the Southern kingdom were evil and only a handful of them were totally good, ones like Asa, Hezekiah, Manasseh and Josiah.  They weren't perfect, but they were devoted to the Lord most of their lives.  (I read that today in my reading.)  ALL of the kings from the Northern kingdom were nothing but evil.

Just last night in my Bible study homework that I'm doing along with the reading (but separate and not connected), she had us write out the kings, who influenced them and what happened as a result of that influence.  For instance, King Solomon started off so great and so very wise, but he made two detrimental mistakes: he never tore down the high places where people went to worship their false gods, and he loved women.  He loved them so much that he acquired more than seven hundred women who were either his wife or concubine!  Can you even imagine?  So his love of women were the ones who influenced him, and as a result, they turned his heart away from the Lord.  It says that in Scripture, and it's one of the saddest statements to me. 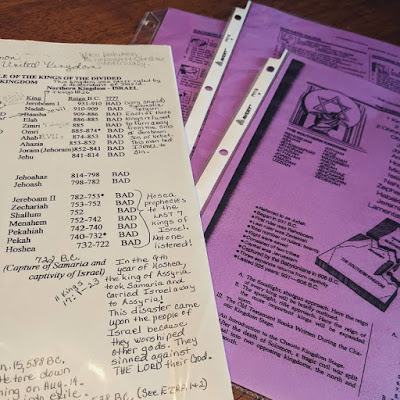 Here are the cheat sheets I have.  They may not look like much, but when you're reading back and forth between books and kingdoms and kings, these sheets are so great to refer back to and make sure your thinking is staying straight.  It gets really confusing.  I posted this on Instagram earlier today and told people that I'm friends with locally that I'd love to make copies of this for them if they're in need of the same thing.  That white sheet you see is from my friend and most beloved Bible study teacher, Barbee.  I go to church with her and have sat under her teaching for years.  Those purple sheets are new to me, and my friend Lynn that I attend church gave these to the writing team when we started meeting back in January.  They were important to look at often because we were writing a Bible study on the book of Hosea.

I mention these and share them with you because I am a very visual and hands-on learner.  As a lifelong student of the word of God, the more helps I have, the better.  Here is another help, that my friend Vonna sent me today.

Here is a link for you, if you'd like to print this out for yourself.

See what I mean?  All the help I can get is so good for me and helps me keep them all straight in my mind.  I also love when something say what books in the Bible were written under which king.  I needed this information as I was studying for writing on the book of Hosea.  All the history is fascinating to me, and yesterday I told my best friend that this wasn't my favorite era to read about, but you know what?  After today, I have changed my mind.  It's all so interesting and sad, and believe it or not, so very relevant for today's time.  Depending on who the king was at the time, that was the way the people went.  When Asa reigned as king for forty years, for instance, while he was king there was no war.  He was good and he did good and that was what the people followed.  Depending on the king the people were either walking with God or they weren't.  That is true today~either you are walking with God or you're not.

That could preach, could it not?  This is a great example of why prayer for our leaders is so very crucial.  I always pray that the Lord would guide all of our leaders in this country, our state, city, and town, and that they would know the Lord and walk with Him or come to know Him as a result of the godly people around him.

Tell me something that's helped you with some place in Scripture that is difficult for you.  I'd love to hear!  In addition to these sheets I shared with you and the link I gave you, I refer to my John MacArthur study Bible a lot, and the Blue Letter Bible online.

Thanks for reading my blog, friends.  I pray you're all reading somewhere in the Bible!  Love to all.