women in the Word Wednesday

Happy Wednesday, friends. I thought I'd talk a little about where I've been reading in the Bible lately. This past Sunday found me in Amos, and I'd love show you a little of what jumped out to me. 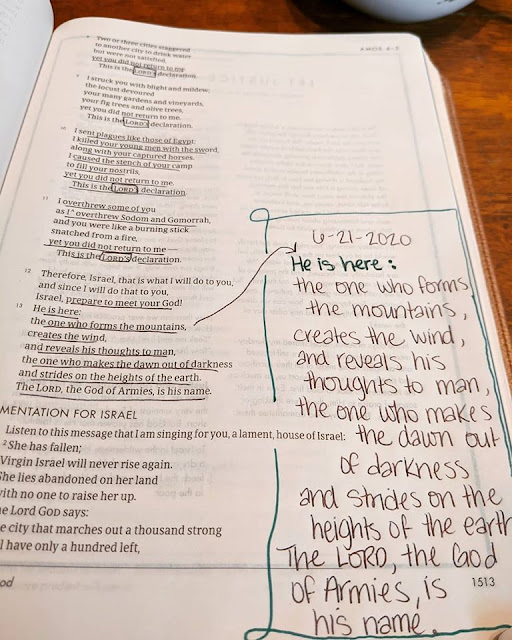 I normally do not love the prophesy books in the Old Testament. I don't really understand them, I never have and it's just not my thing. I told Missy that Monday~we each have our "thing" with Bible reading and prophesy is not mine. [Prophesy and history are her thing, especially when it has to do with Messianic prophesy.]

I just finished studying the book of Hosea very intently in the months since January, and it's because of that I can say that I am loving the prophesy books right now. On Sunday and Monday of this week, I read the book of Amos. It's a short nine chapters, and this picture above is from where I was on Sunday. I love what Amos 4:13 says.

He is here: the one who forms mountains, creates the wind, and reveals his thoughts to man, the one who makes the dawn out of darkness and strides on the heights of the earth. The LORD, the God of Armies, is his name.

It reminded me so much of what I studied in studying for writing on Hosea. In chapter four, Amos was warning Israel (the Northern kingdom with all the bad kings) that judgment was coming to them if they did not return to the Lord and repent of their sin against a holy and righteous God. God is so holy that He cannot look upon sin.

Your eyes are too pure to look on evil, and you cannot tolerate wrongdoing. Habakkuk 1:13a

Sin had to be punished. God gave them warning after warning to return to Him and just in Amos 4, He kept saying, "yet you did not return to me." Israel was stubborn and prideful, and their hearts were hardened toward God. That is what pride does, by the way, if it goes unchecked for too long.

God had given them chance after chance. All they had to do was repent of their sin and turn back to Him, but they didn't heed His warning. He warned them in Amos 4:2 of what was to come.

The Lord God has sworn by his holiness: Look, the days are coming when you will be taken away with hooks, every last one of you with fishhooks.

Israel continued to reject God and though they were stubborn and prideful, God didn't abandon them completely because of His great love for them. He was always near them and you can read for yourself that time after time, He was moved to compassion on their behalf. All they had to do was turn away from sin and turn back to God.

Doesn't it seem so simple today, as we look back on these past events?

Why do I write about all of this, you ask? Well, doesn't it seem like our own country right now? As a whole and as a nation, we have turned our backs on God. We took God out of schools, it became legal to kill unborn babies, and we are biting and devouring each other in our own nation. We are prideful, as a whole and as a nation. We are stubborn and we have forgotten God. There are a few of us who love Him, sure, but we are definitely the minority. We could easily turn back to Him as Lord and Savior...but will we? I don't know the answer to that.

What I do know is that God is good. If we were to call out to Him, He would be right there, ready to forgive, just like what I wrote from Amos 4:13. I'm going to share it once again.

He is here: the one who forms the mountains, creates the wind, and reveals his thoughts to man, the one who makes the dawn out of darkness and strides on the heights of the earth. The LORD, the God of Armies, is his name.

In His majesty as Creator God, He formed the mountains. He created the wind, and just like the Holy Spirit, though we cannot see it, we know the wind is there and we can feel the gentle breeze of it on our face. He reveals His thoughts to man when we read His word and that is also how He speaks to us today. He made the dawn out of darkness~His light (the dawn) pushes back darkness. Read what John 8:12 says:

Jesus spoke to them again: "I am the light of the world. Anyone who follows me will never walk in the darkness but will have the light of life."

He strides on the heights of the earth, and as the Jamieson-Fausset-Brown Bible Commentary states, "God treadeth down the proud of the earth. He subjects to Him all things however high they be."

The LORD, the covenant keeping God of Armies is His name. God is Creator and He always keeps His word. When we repent and turn from sin, He is compassionate toward us and He is abounding in love and mercy. He lavishes us with His grace. It's so simple.

Do you know Him? I want you to know Him like I know Him. You can know about Him and not know Him. He wants you to know Him and He longs for a relationship with you. So many people think they're not good enough yet, but He wants you to come as you are~messy and raw and vulnerable. He will take the old you and make a new creation. You will be forever transformed when you answer His gentle beckoning.

If you want to talk, reach out. Don't wait! Do it today, we are never promised one more day here on earth. You can comment on here, email me, text me, call me, find me on social media. I'm easy to find.

Thanks for reading. Love to all.

I love the reminder in the truth of Amos 4:13! Thanks for sharing that today.

I have to say I don't think I've ever read Amos and this is a good inspiration to do it! He is HERE with us, even in these days when it seems nothing is right in the world.

It's a great little book, once you gain a little insight about the history of Israel. Google is such a great tool, and I use it often to look up old testament historical facts. I also have a good study Bible. I use John MacArthur, but Tony Evans has a great one too! ❤️