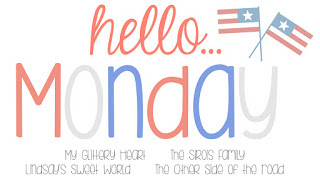 Happy Monday, Friends! I'm linking up with Tanya from The Other Side of the Road and her friends for this blog post.

It was such a good weekend, one full of celebration, laughter, family and worship. I'll start with Friday night. We had Toddley's parents over for dinner, because it's been a minute since I've seen them. I didn't actually think about it being a night to celebrate Father's day, but since that was yesterday, I took advantage of it and we had a great evening.

It's always fun being with them when they're here and I enjoyed catching up with them. On Saturday, a friend of mine told me I could swim in her pool because they were going to be gone all of Saturday, so I took her up on her offer. 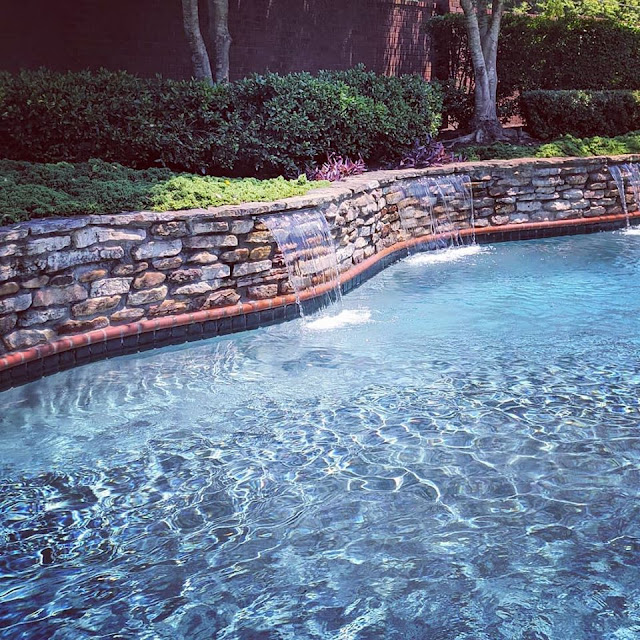 And that's where I spent Saturday from ten until almost two in the afternoon. It was GLORIOUS. I am not kidding when I say that. My mom in love went with me, because she is the one I usually swim with in the summer. She has a pool in her neighborhood that we go to, but pools and summer are both canceled, so I was really wanting to be in some water...I posted this picture below on social media last week and meant it as a joke, but it's because of this picture that she reached out to me about using her pool for the day. 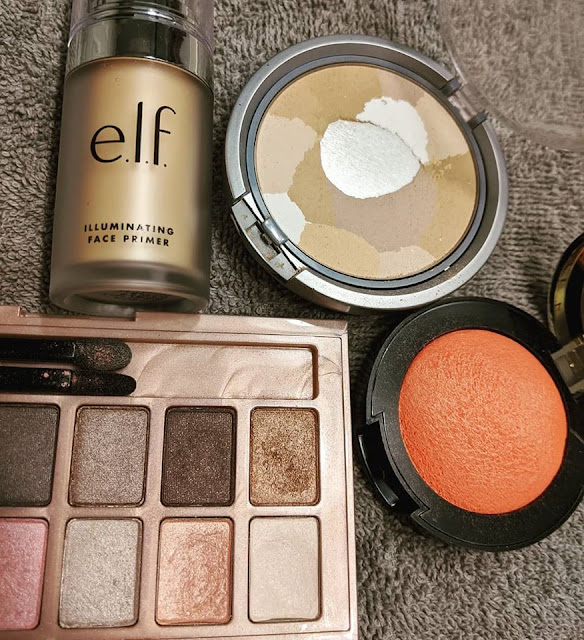 I mentioned summer and swimming being canceled, so I was having to resort to shimmery makeup to make it seem like I had some color on my skin from the sun. (Side note: I ordered this new illuminating face primer by Elf and that pretty new blush from Amazon last week and love them both~one was $7 and the other was $6. Bonus! It's not necessary to spend a lot of money on makeup.)

After swimming all day, I came home and showered and rested for a bit before going to my dad's house to celebrate Father's day with him. Toddley worked with the sheriff's department that night, so my sister Trish met me here and we rode out to Dad's together. I ordered a meal from Zopita's Kitchen here in The Ville on the town square (lasagna, salad, bread) and we took that and some Hello Dollies that she made out to their house. It was such a fun night, and it was better and more relaxing than being out in a restaurant. 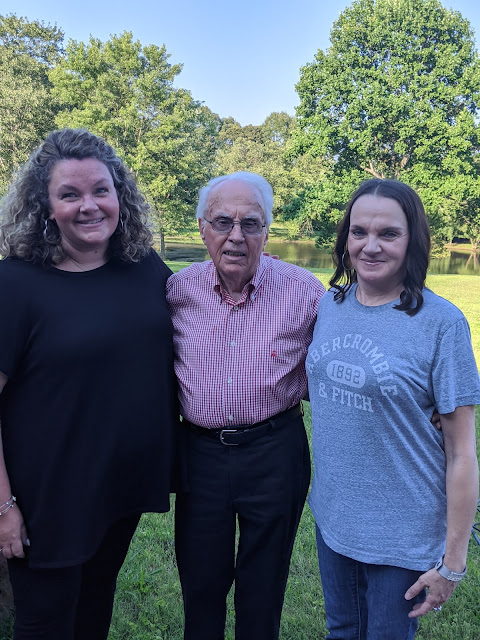 Not the greatest picture, but a fun night, and one I'm thankful for. I do not take any of these precious life moments for granted. Dad is 89 years young, and we are so blessed that he is in such great health considering his age.

I was back home at eight thirty and in comfy clothes. I vegged out and watched a show or two then went to bed. Yesterday morning was church and it was so good! During the worship portion, I got to watch the sweet daughter of a friend of mine who was on the praise team that day, and Bexley and I had a great time together exploring the grand foyer part of the building and listening to the music and singing together. She's a doll. After church I rushed home and finished getting lunch ready, then Mom and Bill came over and ate with us after church. It was nothing fancy~we had hot dogs and chips and dip, but it was fun and we were able to celebrate Bill.

Toddley and I stayed in the rest of the night and had a nice quiet evening at home. Last week was really busy, so I'm looking forward to a slower pace this week. How was your weekend? I'd love to hear! Thanks for reading my blog...love to all. 💗
at June 22, 2020

That pool looks beautiful! We all need a little retreat by a pool here in the south :). Happy Monday!

It really was amazing--I was so glad for a day in water! And I second your thought. It was hot last week. Thanks, I hope the same for you! ❤️

It was! It was such a beautiful and relaxing day. ❤️

That pool is GORGEOUS! Your dad looks great especially at age 89. Hope you have a great week!

It was so nice out there, Tanya! I was so glad my friend let me use it for the day. I agree, it was beautiful. Thank you! I am so fortunate that he is still so healthy and active. I have good genes in the family...you should see my mom!