a few things about the people in my house

I used to do posts about the people in the house a long time ago, and I think I titled them "He".  I was inspired by another blogger to do this today, though, and to have it to look back on someday.  Crazy times! 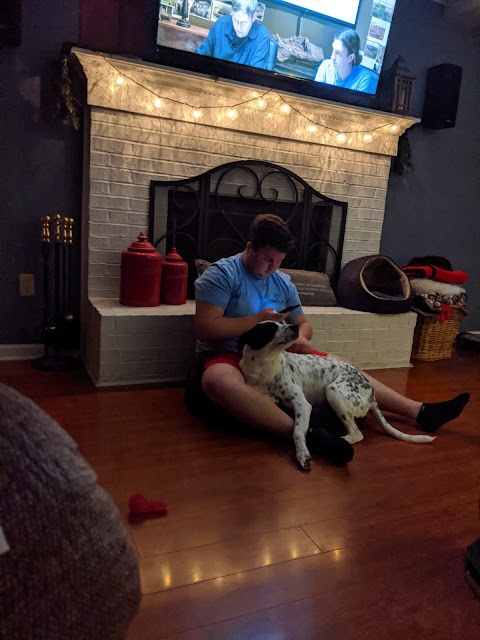 Graham and Todd have been working from home ever since mid-week last week, so it's still the same.  Today they both actually had to put on real suitable-for-the-public clothes and go do a couple of jobs.  Graham has worked on his truck, detailed his truck, deep cleaned his room, and binge watched tv shows on Netflix.   I think I heard him on the X-Box a couple of nights ago, too.  Periodically he will get in his truck and go drive.  His truck is a diesel and it really does need to be cranked and driven every day or so.  I think the dogs have enjoyed him being at home so much.  At least Crash has.

He's gone and gotten takeout a few times since we've been told to stay home, and he comes downstairs every once in a while and sits and does this.

I think more than anything he misses going to truck shows and meeting up with the friends he's made there.  Who knows when that will start back up. 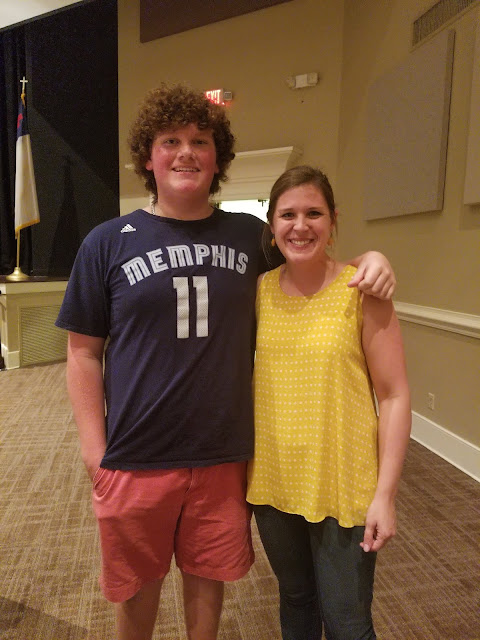 Drew has been enjoying some much appreciated rest and relaxation.  His schedule is crazier than anyone I know, and I know he has loved the mornings to sleep in and the nights of not having to be anywhere.  He works from 7:15 to 9:15 every morning, most weeks, and also 3:15 to 6:15 at a Christian daycare.  In between that, he goes to school and keeps up his grades.  He came down at two today for lunch and told me how messed up on time he is right now, because he's been sleeping in every morning and staying up until 3 a.m. playing X-Box with friends over the internet.

His daycare has been closed this week for cleaning and it'll be closed again next week, and it hit him yesterday that he'll be away from his beloved kiddos there that he adores and that he'll be here and alone on his birthday a week from tomorrow.  Poor guy.

Other than that, he's loving the online school thing, because just last night Todd caught him "in class" while playing a video game.  He also thoroughly cleaned his room this week. 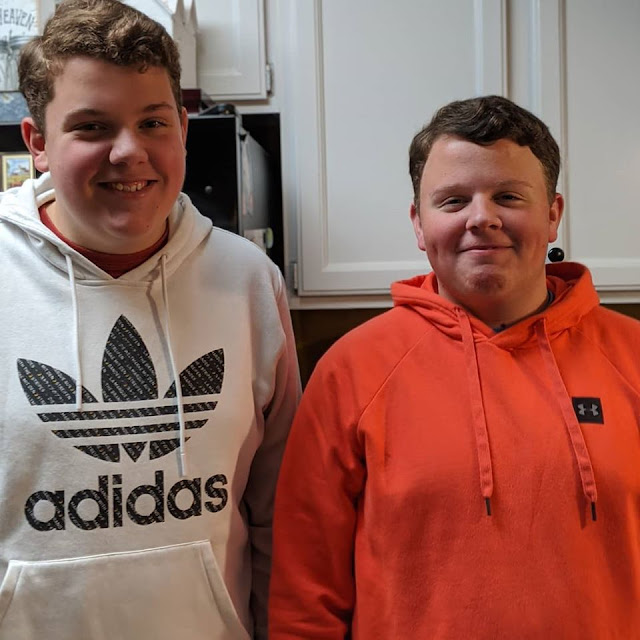 Jonah has been bored out of his mind.  I've not made them start back to school yet, like I said I would, but he's been keeping busy.  Or trying to.  He's cleaned the garage out two different times now, and detailed three vehicles.  (For free.)  He stayed up until three a.m. one morning watching YouTube videos on how to construct some high shelving in the garage, and dreaming up the plans.  (And today they went and purchased the materials needed to complete the job.)

He's cleaned his room, he's gone to get takeout, he's gone for drives, he's been to the store for me, and he's played video games and watched a new show with Todd.

Jonah loves to be busy and is very social, so this hasn't been the easiest for him, but overall, his attitude has been great.  He's been battling a sinus thing all week, and in the midst of all this, he's not been feeling great.  Just imagine what he can do when he feels great.

Noah has gone to work several times, and a couple of those times, he's been sent home early because they weren't busy.  He's played video games, cleaned their room, gone to the gas station and to get takeout, and laughed his head off with Drew.

He's also really social, but he's also okay with being at home.  He offered to help his twin clean the garage the other day, but Jonah actually said he preferred to work alone, that everyone else would get in his way.

Todd has been binge watching a show on Netflix that I am ready for to be over, he's messed around in the garage, he's done a couple of honey do things for me, he's helped me by shopping at Costco, he took Crash to the vet, and he's worked.

And you know what I've been doing.

So that's us for now, and how we're all "handling" this.  Some days are really good, like today because of the sunshine, and some days are sad when things hit them, like Drew being at home alone on his birthday.  We're just taking things like everyone else, one day at a time, and staying off of all the media outlets.

I'm leaving you with my new favorite thing on the internet.  Click here to go listen to an incredible video of a bunch of singers in Nashville collaborating for a hymn sing type thing.

Thanks for reading!  Love to all.

I loved hearing more about your family. It sounds very similar to what we've been up to...tackling some projects, getting take out food every once in awhile, and trying to figure out this new schedule we all have. Hope you have a good weekend!

Thanks, Tanya! I hope you have a good weekend, too. Just more days at home! We've got a couple of things we're hoping to finish up around here this weekend, so that's exciting!