My friend Marcia got me started on December 23rd being called Christmas Adam.  I think it's brilliant, and I've called it that ever since I first heard her nickname for that day.  I think in her husband's family, that's the day they always do Christmas together, and the name stuck.

Here's what this week has looked like for us.

I spent the majority of Monday with Dad, my stepmom Sandy, and my sister Trish.  Everyone in their house was in all different directions that day, and we reached out to help some.  I ate lunch with them, and was back home around two thirty.  Todd came home early that day, and we were going to wrap some gifts we were giving out the next day, but I needed to sit for a while.  I don't even remember what we had for dinner!

Some gifts got wrapped that night.

On Christmas eve, I did some more wrapping, and we delivered some gifts to some people.  We were gone from about ten thirty that morning until right around three.  We were home for forty minutes, then we headed to church for the Christmas eve service at four.

This is one of my favorite traditions that we do every year as a family, and I almost asked if we could skip it this year, because of some circumstances that couldn't be helped, but Todd made the final decision, and we all went.  I'm so glad!  He knows I would have regretted not going, had we not made it priority.  And here's a little thing, about us in our little six people family: we have a big family, with all the extensions, and the majority of our siblings all live out of town.  Because of that, we just go along with what is easier for everyone else, and that's just how it is.  But, we have a few traditions that are sacred to us, and we do those things every single year.  The Christmas eve service is one.  I'm glad we went, and that we were able to see a lot of our faith family, even if I did have inappropriate laughter during the actual candlelight portion.  (Graham's candle dripped hot wax on Jonah's leg, and Jonah jumped about a foot off his seat.)

We went to Dad's after the service, and the night was wonderful.  I didn't take one single picture.  I did get this one, though, a few days ago. 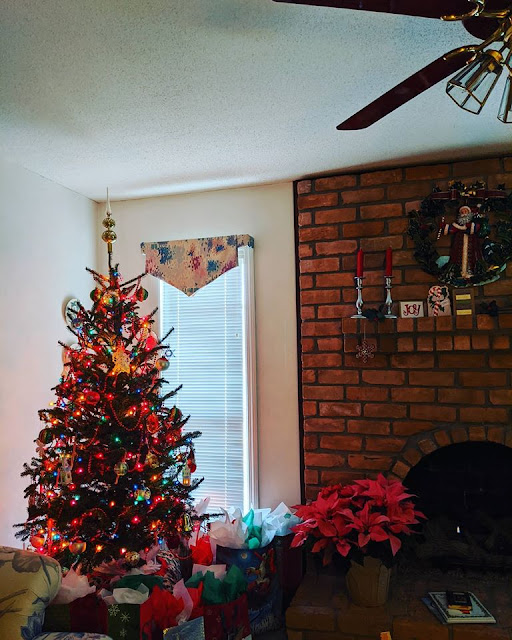 Home.  I'll always think of that word when I go to Dad's house.

"Love is what's in the room with you at Christmas, if you stop opening presents and listen."

(Author unknown to me.)

On Christmas morning, we were up around eight o'clock (because we had to wake them up), and opening presents.  Again, I didn't take one picture.  We went to Mom's for lunch and left home at eleven thirty and stayed until about four thirty.  Again, it was such a beautiful day!  I took very little pictures. 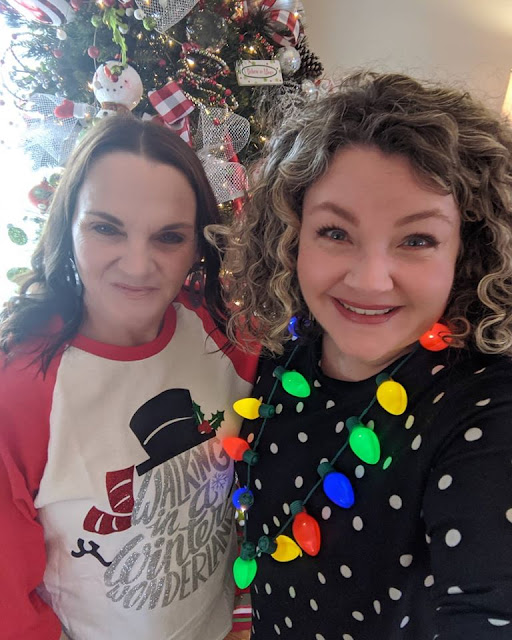 But Trish and I took this right when I first got there, and I'm glad we did.  It seems this was the year of not being too close to my phone, and I'm perfectly okay with that.  I have a few more pictures from the day, but just a couple.

My sister Debi and her hubby Mike came in right as we were needing to come home, but we got to give them hugs and talk for a few minutes before we left.  We had planned to go and look at Christmas lights last night, but we were all kind of tired and ended up staying in.  Well, Todd and me, the boys all went to dinner with friends and to play basketball at a nearby church.  Todd and I had dinner, watched a movie, and he went to bed early.  I waited up on the boys, and ended the night with an hour and a half phone conversation with my best friend.

It was a perfect day. 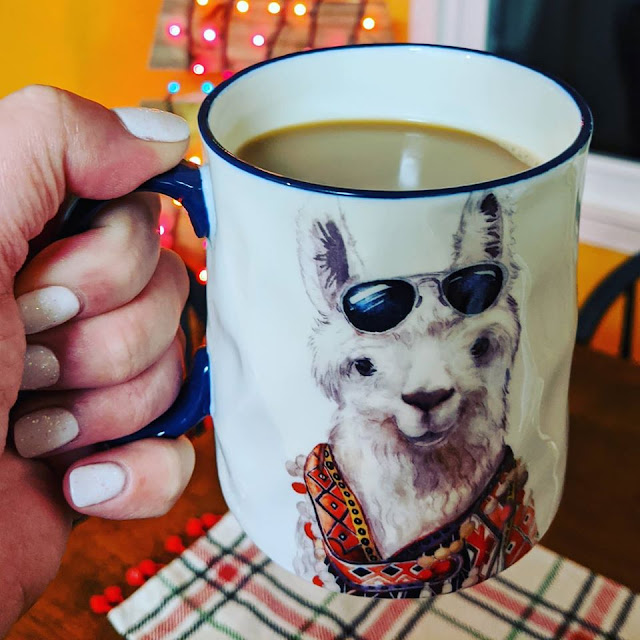 (Because I love this Christmas gift~a set of six mugs similar to this one.)

Today I have to pick up groceries and I plan on coming back home to clean a little, and my dad, stepmom, and sisters are coming over for dinner tonight.  (Terri is here from North Carolina.)  My husband is working a shift tonight with the sheriff's department, and it's back to work for three of the boys.

Meanwhile, there is always laundry calling, so I'm off to tackle some of that.

I hope your day was merry and bright.  More than that, I hope the love of Jesus was real to you and yours in a tangible way.  We do all this celebrating, but often, Jesus is an afterthought.  Don't let it be like that, if you're a believer.  Make Him priority!  God gave to us the most amazing gift in His Son Jesus, and though He may or may not have been born on December 25, the point is that the day is set aside to remember His birth, and to take in the miracle of what God did for us by giving His Son for us so that we might have everlasting life (John 3:16).  But He didn't stop there, though He could have and it would have been more than enough.  He lavishes love upon us, and He just keeps on giving and giving.

Everything is from Him, for Him, and to Him.

I am always willing to talk about this more, if you don't know Him.  Reach out!