Good morning!  It was heavenly being at home and sleeping in my own bed last night.  I was so glad to see my people.  They came to the airport and picked me up, and my heart skipped a beat as I saw them.  I had a great time in Colorado, but it is always so sweet to be home.

This post will be full of pictures.  Consider that your warning.

On Wednesday afternoon, after a yummy lunch that I made for my family, I packed and was ready by three.  My step-dad came to pick me up at four thirty and we went to grab a bite to eat at Chick Fil A.  We knew we would be hungry if we didn't eat first.  Then we headed to the airport. 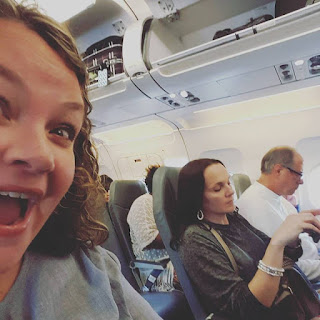 My excited face.  Though, truthfully, it was more of my terrified face.  I hate flying.  I have anxiety over flying and could probably use a nerve pill of some sort.  We ended up changing seats after I took this.  The flight wasn't full at all, so my sister that you see in the background and I moved to the row behind where I originally sat and spaced out a little.  We landed at around eight thirty, Memphis time.  It was so good seeing everyone!  My sister Debi was the first one to greet us as we walked to the baggage claim area, then we saw my niece Erika and then my other sister Lisa and my nephew Jaret.  Erika cried when she hugged all of us.  I think things got real at that moment, hence the emotion.  After we got our bags, we all went to Erika's house for pizza.

We got back to Debi's kinda late, so we went to bed soon after arriving.  My niece Nicole was so gracious in giving Trish and I her room.  Mom and Bill were on the other side of our jack-and-jill bathroom in the guest room downstairs.  In Colorado, the main floor is the upstairs.  I wish I could say that I slept great that first night, but that would be a lie.  It wasn't anything but me~Nicole's bed is so comfy.

The next morning, Thursday, I enjoyed my quiet time on Debi's back porch.  The view from that spot is amazing.  Practically right at their backyard is a field with a barn and horse stable in the background.  That is where Nicole takes riding lessons and works.  Every morning, I would see deer, rabbits and birds.  Also from her porch, you can see Pike's Peak.

We got dressed and were ready to go by ten.  Erika was having a bridesmaids luncheon at noon, at a beautiful Italian restaurant called Maggiano's.  I sat by Nicole.  Isn't she pretty?  She found out while we were there that she was nominated for the homecoming court! 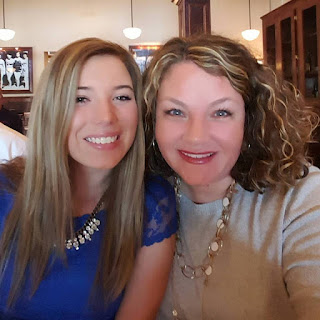 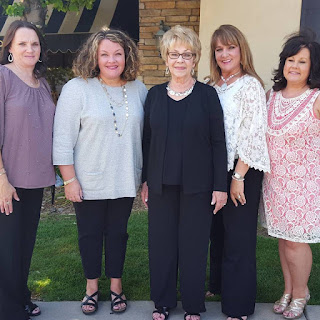 My mom and my sisters and me outside the restaurant.

Below is Erika and her best friend and maid of honor, Morgan.  These girls are precious.  The first time I got to know Morgan was on a trip to the beach when Graham was four and Drew was three.  She won my heart then and my boys won hers.  And now, she is a wife and mommy to a precious son. 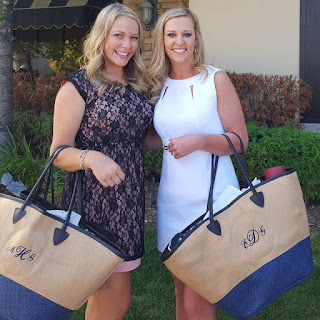 They're so beautiful!  We went back to Debi's house after lunch and rested for a bit before the rehearsal and dinner that night.  Debi and Mike live in Parker, Colorado, about forty minutes outside of Denver.  Erika got married near downtown Denver, so it took us a little over an hour to get there because of traffic.

The venue was called Baldoria on the Water, and while it looks like it's in the middle of nowhere, it's in a bustling area.  It was beautiful, though, and the inside looked like a winery.  The wedding and reception were here, with the wedding outdoors and the reception indoors. 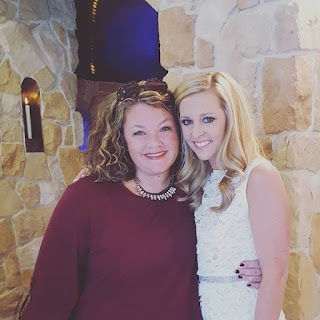 The rehearsal dinner was at a hotel across the street, in the restaurant in the downstairs area.  The food was good and the company was fun.  I might have embarrassed Erika a tiny bit as I relived some of my favorite memories with her in them, but she didn't seem to mind too much.  After the dinner, we got home late and all pretty much went straight to bed.

The next morning we got up early and got dressed so we could drive into the city to help my sister decorate for the reception.  It was a bit chaotic and it was a very long day, but everything went off without a hitch, and it was one of the most beautiful weddings I have ever been to.  My brother in law, Mike, married them. 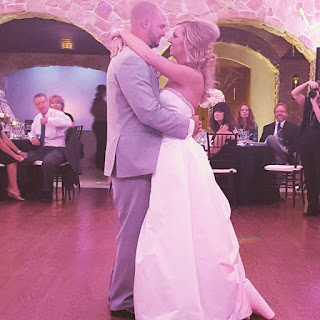 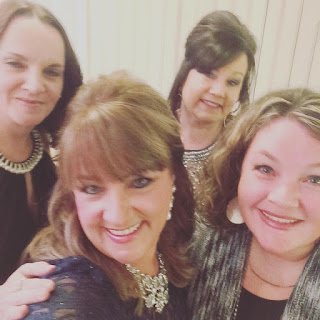 We're seesters!  This was us right before we sang "Goin' to the Chapel" to Erika before she walked down the aisle.  She cried, then I cried.  #storyofmylife

She was such a gorgeous bride.  They left for their honeymoon under a canopy of sparklers, driven away by a friend of Erika's in a Bentley.  My boys might have died a bit when I told them that.

We were exhausted when we got back to Debi's and we all slept late the next morning.  And by late, I mean eight thirty.  We went to Breckenridge for the day, after a long ride in the car that made me minimally ill.  The weather was perfect and the view was spectacular.  We stopped in a little town called Idaho Springs and ate a yummy lunch at a place called Beaux Jo's.  From Idaho Springs, we still had an hour long ride to Breckenridge. 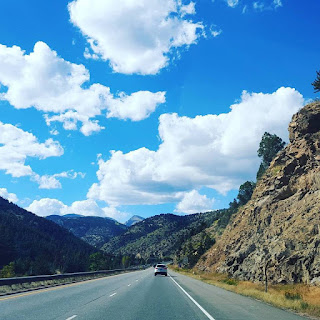 We window shopped in some really cute little shops.  I bought Graham and Drew their favorite brand of tee shirt.  They say Breckenridge on them, and they're Comfort Colors brand.  They loved them.  Jonah and Noah each got a bag they'd been wanting from Cabella's. 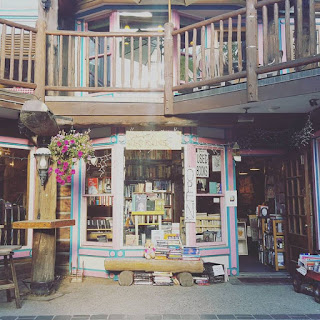 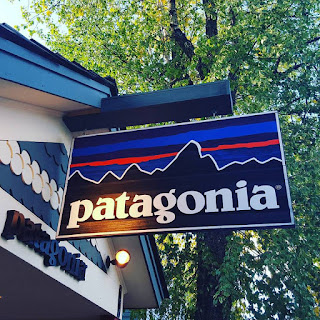 I found my dream store in the heart of downtown Breckenridge.  It was an adorable little used bookstore that had mountains of books everywhere I looked.  I didn't go in, though that was a sacrifice on my part, because I had people waiting on me.  I could have gotten lost in there for hours.

And I didn't even know Patagonia had a shop.  Maybe that's naive of me, but I had no idea.  My boys would have loved seeing this store in person.  We also stopped in the Columbia store.  My nephews and step-dad all bought jackets.  I helped.  :)

Our last stop there was at the Starbucks.  We were all really tired and left for home.  Debi had a delicious lasagna made for us that was in her freezer, so she had Nicole heat it up in the oven for us while we drove home.  Debi is an amazing cook and hostess.  I have never felt so much at home at someone's house.  I loved staying there and I loved being with her so much.

Sunday morning we got up early again and got dressed for our day.  Everyone stayed home except for Debi, Mom and me.  We went to Castle Rock, which was about fifteen minutes away.  We shopped and had lunch that made us all sick and then we went back to Debi's.  Later that afternoon, Nicole had a riding lesson, so Mom, Bill and I went and watched. 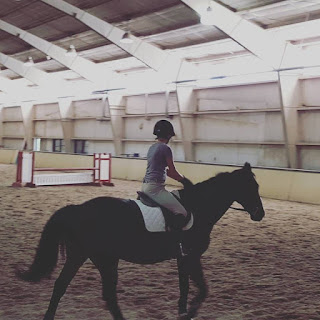 She is so graceful on this horse.  We loved watching her in her element and she impressed me very much with her talent.  I was so proud of her in the moments watching her that I had tears in my eyes.  I love seeing my nieces, nephews and kids doing something they love so much.

Everyone from out of town came to Debi's that night for dinner, but I was seriously sick.  I went to bed early and even woke up yesterday still feeling horrible.  I was praying I would feel better by the time we had to board the plane and my friend Missy was praying as well.  It worked, because after lunch, I felt totally normal.  I was so thankful!  I cannot imagine flying sick.

After a very tearful goodbye, we went through security and the airport and boarded our plane home. 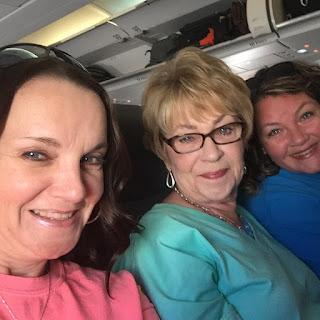 It was an amazing few days.  I am so thankful to God and to my step-dad for the opportunity that I was given to be able to go.  I hated leaving my family at home, but they were fine without me, though they did tell me repeatedly how much they missed me.  While I was gone, my car was fixed and a new puppy was added to our family.  Her name is Callie.  The jury is still out on how much I like her.  She's adorable and all, don't get me wrong, but she has made me miss Andy the Wonder Dog so much it hurts.  There will never be another dog on this earth that could replace him.  The boys, however, are enamored by her.  She really is cute, and so far, she has been a great puppy.

Well, you made it through the duration of this blog post!  Thanks for reading.  Love to all!