All I mentioned from our weekend was the homecoming that took place on Saturday night, but we did do some other things that were fun.  Some of our friends live in a house that backs up to the football field, so Friday night, we went to their house and sat and watched the game from a great viewpoint.  My only complaint was that the scoreboard needed to be see-through.  ;)  From there, we went to another friend's house, who had a bunch of kids in their front yard, jumping on a bouncy house.  We stayed and visited with them for a bit, but I ended up coming on home and they rode home with Graham.

Have I mentioned that I am addicted to Gilmore Girls?  It's taken over my love of books.  I am almost through with season four.  I am already dreading the end, because I have heard that the last season was disappointing.  :/  The reason I even mention this is because I used to go to bed and read.  But now, I go to bed and watch Netflix.

My older boys are playing soccer.  It was very last minute, but the games are fun to watch.  There are only two teams for their age division, and it's co-ed, so they will just play that one team all season.  They had two games last night. 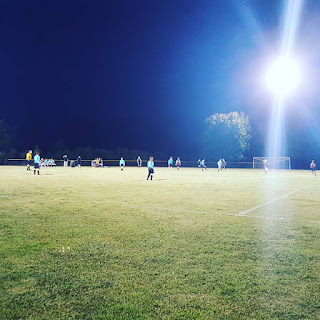 Drew tried playing the goalie, but he didn't love it, so another girl came in to relieve him.  I was proud of him for trying!

On Sunday, after morning church, we had made plans to go to lunch together with our class, but the girls decided they wanted to go on a picnic instead.  Everyone brought something to share.  We had sandwiches on fancy bread, with lettuce and tomato, chips, and homemade goodies for dessert.  It was so much fun, but they were all tired from homecoming, so we ended very early so they could all go home and do their homework and nap. 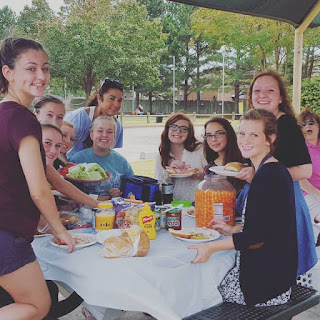 A few of the girls couldn't make it, but this is the majority of our class.  Are they not adorable?!  I love them so much!

Also that day, after community groups ended, we went out to my mom's and step-dad's house to view the blood moon through the fancy telescope.  But when we got there, there were too many clouds.  They were so sweet to make nacho's for us, though, and there was chili they'd eaten for dinner that we had.  It was so yummy.  We left not too long after we got there, and by the time we got home, we could see the blood moon! 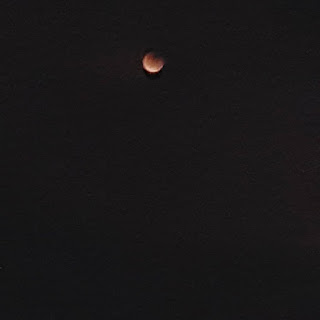 Isn't it pretty?!  It was so cool to keep seeing the progress of the lunar eclipse.  The boys were amazed, as was I.

Last up is the picture I snapped of the dogs yesterday afternoon.  We all know that I do not love puppies.  I like to look at puppies, but I do not love them.  Well, I haven't been too fond of Callie because of that little tidbit.  But over the weekend, she has proceeded to win me over some, and as she starts to understand more and more, I am finding myself liking her.  Somewhat.  ;) 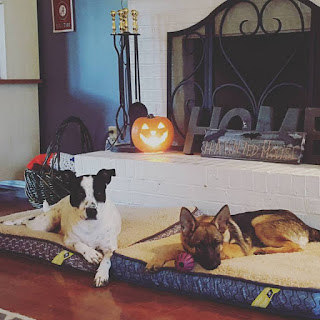 I think they look so sweet in this picture!  They were both just hanging out on their beds, playing with their toys.

Well.  I need to get this day started, so have a great one!  Love to all.