when God fights for you 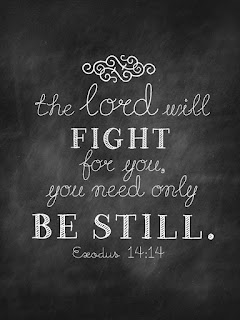 This morning I was reading in Exodus, chapter fourteen.  I was reminded of a passage in Scripture as I was praying this morning, and what was written on the tissue like pages of my Bible jumped out at me.  I wondered if it might jump out at someone else, so I decided to share it on this blog.

Before I begin, for context purposes, let me explain what was going on at this time.

At the time when this passage was written, Pharoah had finally let the Israelites go.  They had been slaves in Egypt for a sweet forever, and after all the plagues that God used to get the attention of Pharoah, the final plague worked-the plague of the death of all the firstborn males.  (That's a whole other blog post.)  Pharoah let them go, and as they were leaving Egypt, God hardened Pharoah's heart again and changed his mind.  God knew that Pharoah and his army would pursue the Israelites, so He directed them out of Egypt toward the Red Sea.

As the army was closing in on their heels, I can imagine Moses crying out to God.  Moses tells the people not to be afraid, to stand firm and they would see the deliverance the LORD would bring them that day.  And in verse fourteen, these words are written: "The LORD will fight for you; you need only to be still."  In verse fifteen, God asks Moses why he's crying out to Him.  He tells Moses to tell the Israelites to move on, and He gave Moses instructions to stretch out his hand over the sea to divide the water so they could cross.

All of that happened.  God sent a strong wind to divide the water in the sea, and the Israelites crossed over on dry ground (verse sixteen).  God was with the Israelites when all of this happened.  He was with them as a pillar of cloud by day, and by night He was a pillar of fire.  When Moses and the Israelites crossed the sea, in verse nineteen, we are told that the angel of God who had been traveling in front of Israel's army and the pillar of cloud which had also been in front of the army, withdrew and went behind them in the sea.  This divided the two armies, and while they were crossing throughout the night, to one side the pillar of cloud brought darkness (for the Egyptian army) and to the other side it brought light (for Israel's army).

And He brought deliverance to His people.

How many of us try to handle all of life's problems on our own?  I am not suggesting that all of our problems have the same magnitude as what the Israelites faced that day, but we all have our stuff.  Whether it's fretting or worrying, whether it's a sickness we are facing or if one of our loved one's is suffering, whatever it is, God is in control.

He is fighting for us, and He hems us in.  In Psalm 139, those words are written: "He hems me in."  When we surrender to Him and place our trust in Him, we can rest assured that He is fighting our battles, and He is always with us.  I know that not everything will turn out the way we think it will, but we can trust that He will work out His will for our lives.  I don't know what His will looks like, but I know that it's far better than anything I could ever imagine.  He will do what is best for us, and He will get the glory for doing just that.

I pray this encourages someone today.  Love to all.