So, this post is for them.  Or you, if you need a little dinner inspiration.

I made oven fried chicken tonight (baked in the oven with a panko bread crust on the outside, with some spices added in for more flavor), and these were my sides. 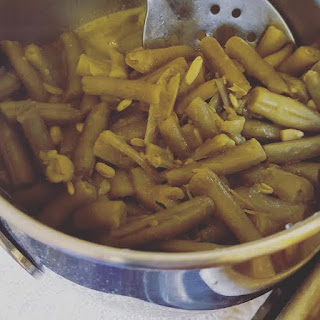 Green beans are my favorite veggie.  These are out of a can, with a little butter and salt added.  The thing that makes these so delicious is the fact that I cook them on medium high heat for almost an hour.  They're super tender and flavorful by the time they're done.  If you have a chicken boullion cube, they're really good with one of those thrown in.

My other favorite veggie that everyone loves are these oven roasted potatoes. 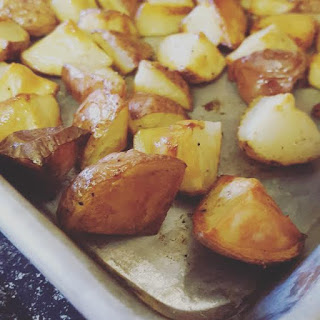 I dice potatoes and in a large bowl, I toss them with olive oil and any spice I happen to be in the mood for.  Tonight's spices were salt and Cavender's Greek spice mix.  After they're evenly coated, I bake them at four hundred degrees for at least one hour.  Sometimes, it takes an hour and fifteen minutes or so.  I think it depends on the pan I use.  You want them all sizzly and shrunken up like this, because that makes them crispy.

Another couple of things I love to make for my family are Italian roast beef and beer cheddar joes.  For the roast, I use my crock pot.  I put the roast in and cover it in beer.  I add a packet or two of Italian dressing spice mix and two jars of pepperoncini peppers with the juice.  I let it cook all day long, then serve it with bread and the above potatoes.  It would be amazing on a hoagie roll, too.

For beer cheddar joes, you brown a couple of pounds of ground beef.  When it's brown, stir in a couple tablespoons of flour and stir for two minutes to get the flour taste out.  Add a bottle of beer and a couple of huge handfuls of shredded cheese, and a few shakes of salt.  We eat it as an open faced sandwich, with no other sides.  It's that good.  I got the recipe from Mix and Match Mama.  Google her and then be further amazed and inspired.

(And if you ever come over and find beer in my fridge and are concerned, don't be.  I use the beer to cook.  Jonah's little friend was worried that we were closet drinkers.)

We eat green beans all the time too. I never thought to let them cook that long though. I will be getting this. I haven't made those potatoes in a long time. Thanks for the reminder! Adding those to next week's menu!

My mom taught me that trick, Shari. They're delicious when you let them simmer for so long. I'm glad you were inspired! I need inspiration all the time, myself. I get stuck in ruts with what I make, and I know my family gets tired of the same old thing. Can't wait to see your new blog!