I love traveling.  I love Jesus.  And I love my friends.  When you combine those three things in a minivan and two days together, that is the recipe for a really good time.

A few months ago, the youth pastor at our church offered a trip to those of us are considered youth leaders.  (Volunteer and paid, but I'm a volunteer.)  The catch was that it was only a one night trip, and it involved us traveling to Dallas.  I didn't really think I would go, but when I was talking to my sweet hubby about it, he encouraged me to go.

It turns out that this is a free conference offered to those in youth ministry every single year.  It's put on by Student Leadership University (SLU) and it's called Youth Pastor Summit.  Because even those in pastoral positions need encouraging.

My sweet friend Abbey came to my house Monday morning at six fifteen and we went to church to pick up another friend and her son (Lauri and Chandler, who might be THE MOST AMAZING teenager I have ever had the privilege of knowing.).  We met yet another friend downtown (MK), and then we were off.  We made several stops (breakfast, gas and lunch) and arrived in Plano around two forty-five Monday afternoon.  The conference began at three, then we broke at five thirty for dinner.

The worship was amazing and the speakers were incredible.  It was basically a twenty four hour period of being encouraged and taught by others.  Every time a new speaker came out to talk, it was better and better, and I never wanted it to end.

On Monday night, we met a friend for dinner (Erin) who used to lead our girls.  It was so good seeing her!

The event was held at Prestonwood in Plano, Texas, and the church was AMAZING. 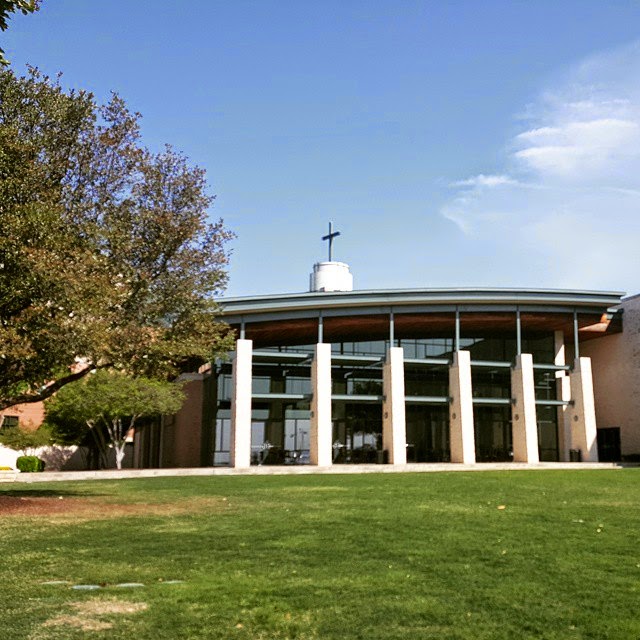 This was only the fellowship hall and youth center.  It's bigger than Bellevue, if you live in Memphis.  There are multiple campuses.  My friend Erin works at the North campus as the girls ministry leader. 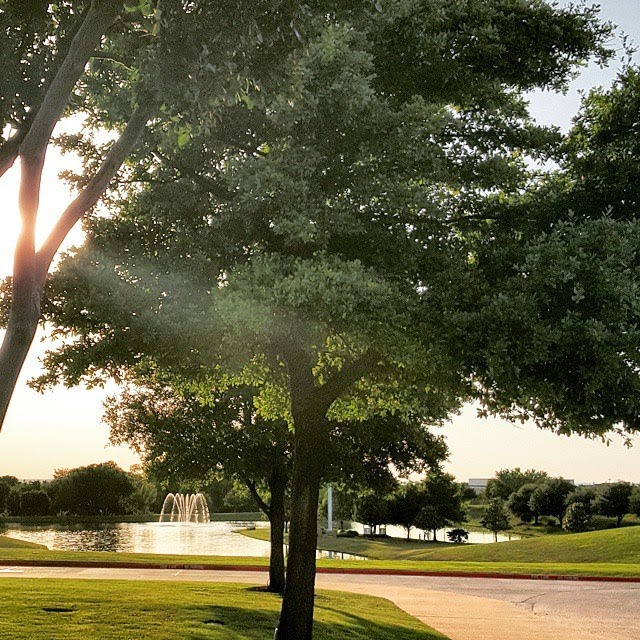 While the sun was setting on Monday night, I sat on some steps that overlooked this area and watched the sun go down, as my dear husband made me laugh and laugh over Drew's driving antics.

Yes, I said Drew's driving antics.  Somebody got his permit!

For each session, there was a different speaker.  The speakers were Ed Newton, Josh Griffin, Doug Fields, Jay Strack and Bob Goff.  The worship was led by Michael Ferren, former lead singer of Pocket Full of Rocks.  (I used to listen to them!)  There were break out sessions on Tuesday, but I didn't go to anybody new.  My favorite speaker was at the very end, the author of the book Love Does, Bob Goff.  He was funny and endearing and encouraging.

We were dismissed around three yesterday afternoon, then we started the journey home.  (I navigated almost the whole trip and Abbey drove, except for about an hour when I drove on Monday.  The soccer mom van was fun to drive!)  The trip home was fun and entertaining.  We only listened to music for the hour I drove on Monday, and the rest of the way?  We talked.

I love talking, obviously.  And singing random songs with Abbey, who is like my other half.

I was so tired coming home that I might have been a tiny bit delirious.  I laugh a lot when I get like that, so needless to say, I cried most of my makeup off.

It was such an awesome trip. 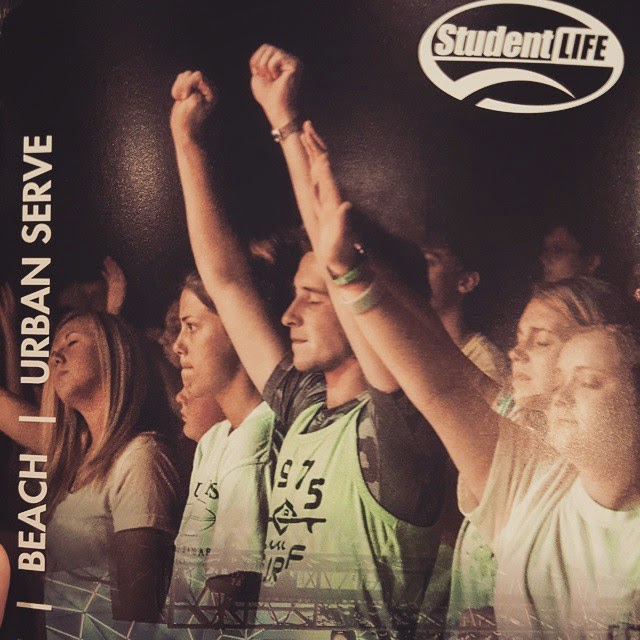 In our goodie bag, we found a Student Life brochure for summer camp, and I know the people on the front!  In fact, next to the girl that is the second one from the left, is Graham.  I would know that profile anywhere.  Left to right are MK, Graham, Hannah, Chandler (amazing teenager), a girl I don't know and Holly (another amazing teenager who's a freshman in college this year). 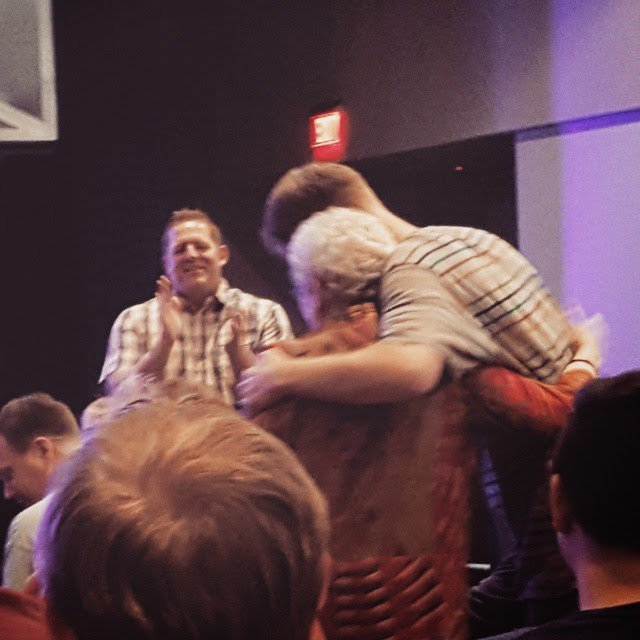 Y'all.  This sweet little old lady turned SEVENTY FOUR YEARS YOUNG yesterday and she is STILL ministering to those who are teenagers.

I am NOT too old for this.  I have another thirty six years before I reach her age, though I don't know that I'll last quite that long. 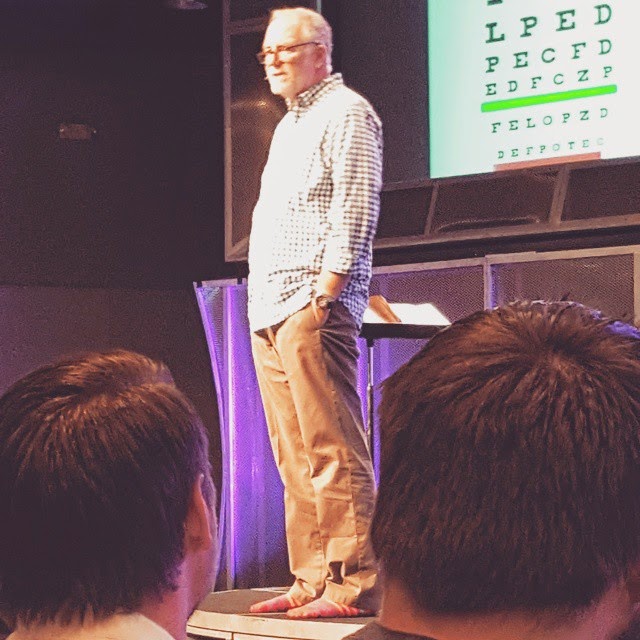 This is Bob Goff, in all his shoeless wonder. 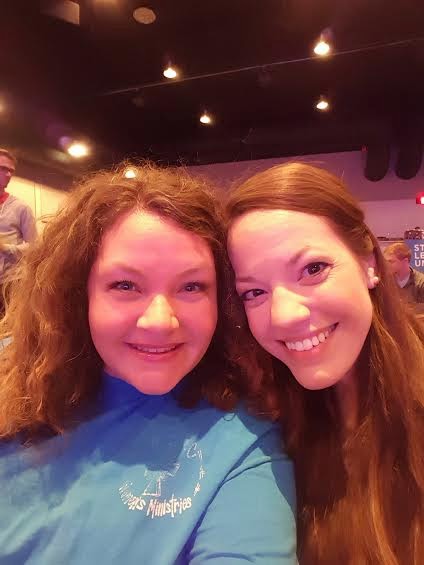 I adore her.  The more time I spend with her, the more dear to me she becomes.  And to think three years ago, I didn't know her is astounding to me.  She's quickly become one of my closest friends.